How Monday became the new Sunday

In our nearly 3 years in Singapore I got into the habit of going for a movie every Sunday evening. It was a good ritual to end the week and meant I kept on top of the goings on in Holly/ Bollywood. It started with the time V had long work hours and I was home with a small child all week, every week. Sunday evening was when I'd leave them to it and have a few hours of eacapism into the Screen.

Toward the end of our stay in Singapore the movie watching rate dropped and I was watching every 3 out of 4 Sunday's. I put this down to the pressure of the impending move and vowed to get back to it with gusto once here in HK.

HK is a whole different ballgame though. I live on the Southside and there is not a single movie theatre on the entire south of the Island. I'd have to go north via shuttle/ bus/ taxi to find a decent cinema hall. Even when I do this is I am at least half an hour away. In addition the few apps that show the movie schedules weren't great. Also the whole settling in to new city meant a lot of weekend activities to help settle and meet new people. So needless to say the first few months were movie light.

Subsequently though I found myself watching stuff on a plane journey and resolving to get back into it. I was missing too much!

During a conversation with someone about how hectic the weekends are she was telling me how she 'celebrates' Sunday on a Monday by vegetating in the house once everyone has left for work/ school. It sounded like an appealing idea and that very Monday I decided that I too would lounge around on a Monday morning, admiring the view, reading and nibbling on chips in front of the TV, instead of getting into errands and chores.

By the second Monday I figured out that this wasn't for me. I needed to do something to celebrate my 'Monday is the new Sunday' existence and so I decided to look up the movie schedule and hit a theatre. Et voila, Monday is my new Sunday. I now pick one of three equidistant cinemas and an early-ish show and watch a movie in peace every Monday.

The only grouse is the lack of any Hindi movies on HK island. Surprising considering how many Indians seem to be in this country! All the Hindi movie screenings seem to be at awkward times of night and in Kowloon. Got my quick fix by watching 2 in a row when in Singapore 2 weeks ago: Te3n and Dhanak. I like the make believe world of movies: where their problems are not my problems and I can be a mere spectator.
Posted by 30in2005 at 10:21 PM No comments:

I'm feeling like a pressure cooker today. And urgently needing to vent else I might explode. Luckily none of the people mentioned below know of or read this blog....
Things that are currently annoying me:
1. People with more than one child who hold both the holier-than-thou stance and the 'I have too much on my plate; it's much harder to coordinate with two/ three' stance. No shit. Not your business that I have 1. Frankly don't care if you have 6.
2. Misspoken words: I've been accused of this recently in regard to holiday plans and its led to an all out fight from which yours truly quickly has now clammed up and retreated. I know I am right but shouting it louder won't get me the result I want. Turns out I don't have to be an idiot just because everyone else is. I'm all zen.
3. Stupid swimming pool rules which say there must be 2 lifeguards by the pool at all times. This means no early morning or late evening swims - too costly apparently - and its too hot the rest of the time. This is my way of letting of steam - 50 lengths - and as I don't have it these days I have this blog to shout at. Not sure what the lifeguards will be saving me from anyway - they are too busy looking at their phones.
4. Predominantly white women's clubs - or rather the assumption that if we are of Indian descent we possibly couldn't be any fun socially. I swear, the amount of time I have invested in friendships and relationships is turning out to be so not worth it. Watching as people I thought were friends go out to lunches and the like in big groups but exclude me is painful. This has been a problem for a few months now. Luckily I moved past it and stuck to my small group of pals (which in itself needs a lot of effort) till this week I was invited to coffee by one lady who proceeded to tell me that normally she would have invited x y and z but since they have left for the summer she is lonely (and the unspoken assumption is that she invited me only because I am still here). I wish I could say I am imagining all this being slighted but no it's all too real.
5. Demanding quality: I've seen this happen recently. A product and service being paid for and a crap job being done with it and no one saying anything because it's a pal that did it. People not taking responsibility and blaming me/ us for things not working. Ruining friendships is what going into business with or relying on a friend has done. And in both cases my reaction has been disproportionate to the situation. Like V says I have to think of these things as monetary transactions and not get emotionally bound within them.
Maybe it's me. It probably is. But frankly I don't give a damn. Also now that I'm a curmudgeonly 40 I don't think there is much scope for change.
Posted by 30in2005 at 7:55 PM 5 comments:

For the mums who think I spend too much time with my kid and do too many crafty things with him, sorry. I suggest you walk away now as this post will only aggravate you and make you dislike me more. Yes I like both those things but that's just me. Weird.
Birthday is a month away but this past weekend we celebrated Kids birthday as school is about to close and all his friends will disappear for the summer. We celebrated on Saturday morning, sharing it with his classmate who is just a week older than him, so also has a summer holiday birthday.
Since this past December vacation, when he watched his first Star Wars movie, Kid has been obsessed. And so Star Wars birthday party it was. And here is what I and he made and did over the past month to get out of my funk: 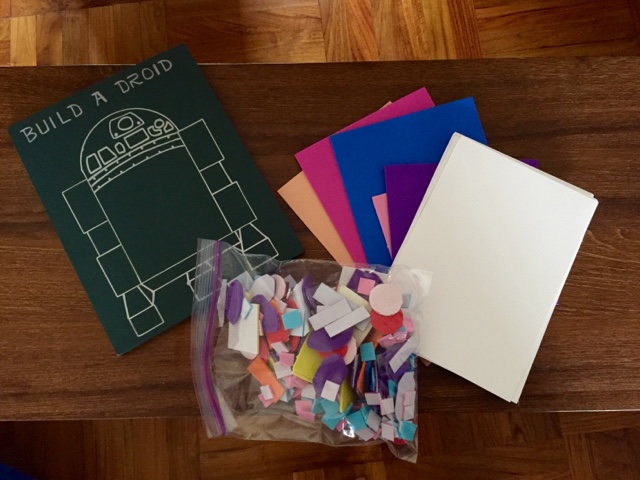 Activity corner - White cards, cut up foam pieces (and crayons/ pencils not in the picture) 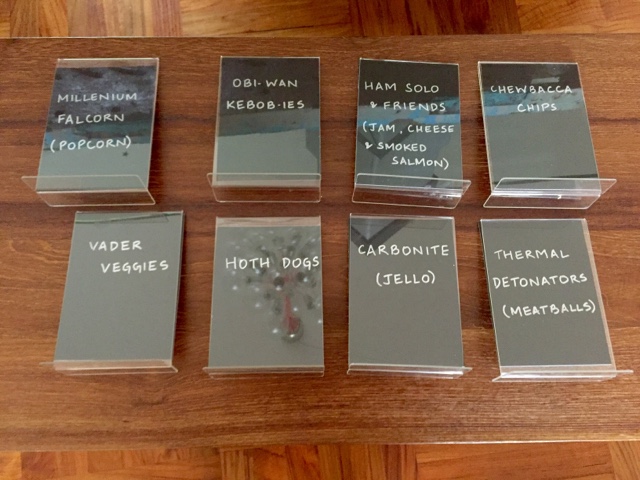 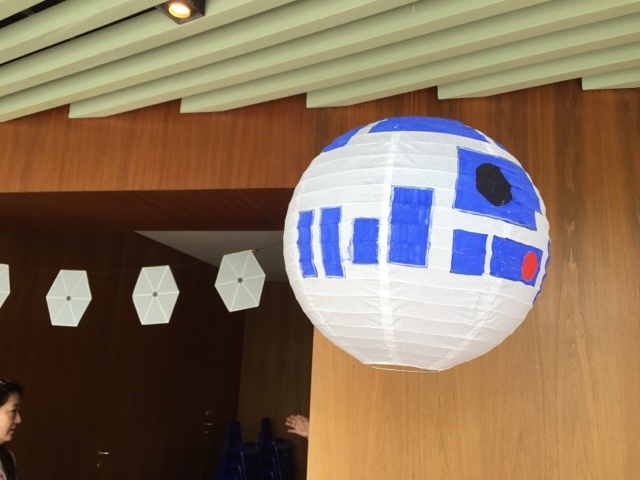 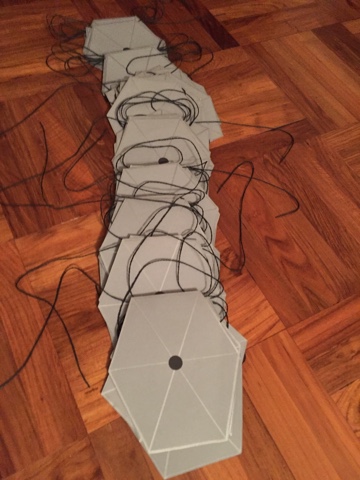 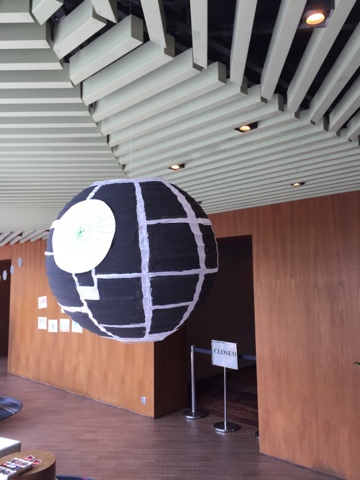 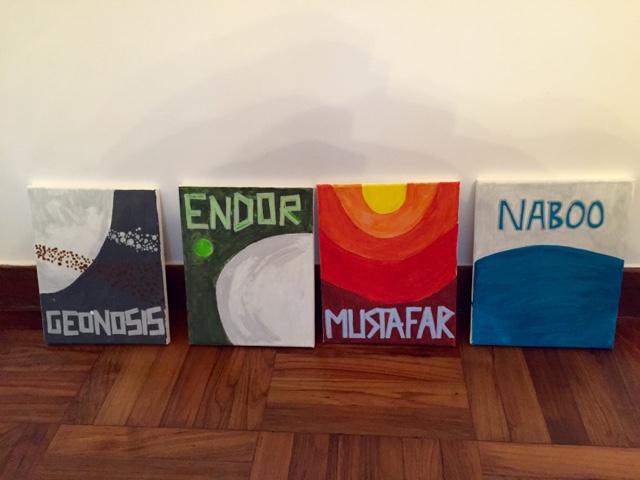 I was going to use this for a 4 corners dancing game (think gentler, no shove version of musical chairs) but we ran out of time so it ended up being wall art. I gave 2 to the kid we shared the party with as a reminder of the day and friendship he and and my son shared. He is leaving permanently for another continent this summer. 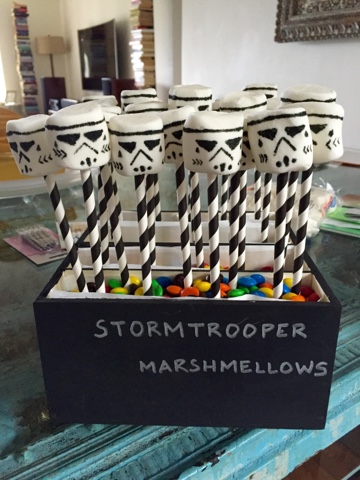 Yes I know the spelling is incorrect. I was following my child's bidding (he is at an age where he 'knows EVERYTHING'). Took nothing away from the tasty-ness of eating the 'very evil Stormtroopers'. 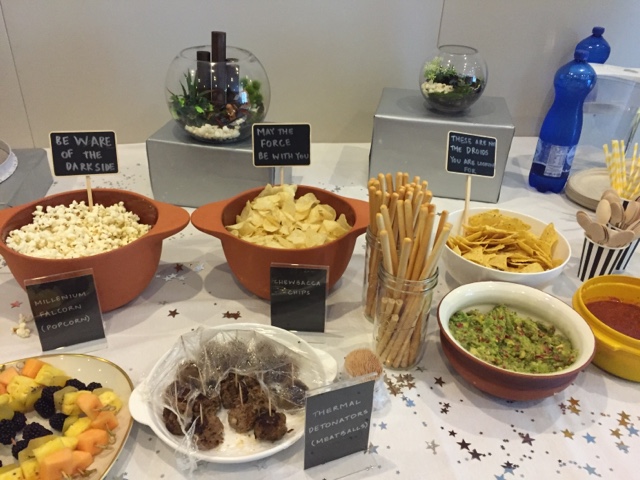 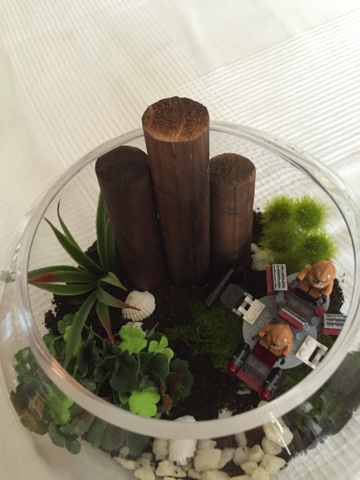 1 of 2 terrariums - kid and I made these together. My glass bowls, fake mud, fake rocks, fake shells, fake plants, fake fence and real Star Wars Lego. 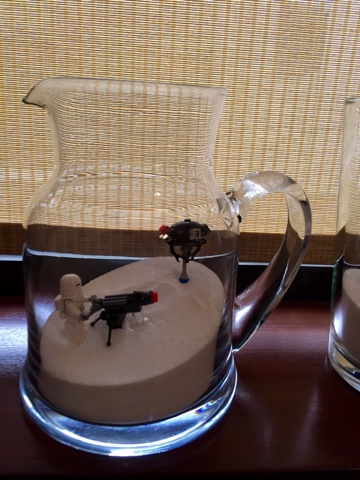 1 of 2 terrariums from the planet of Hoth. Fake snow, my glass jug and real Star Wars Lego. Small abstract Star Wars foam art. You will see them behind the table on the wall, scattered around the tie fighters banners. 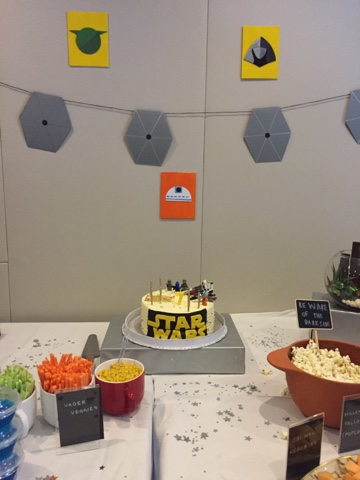 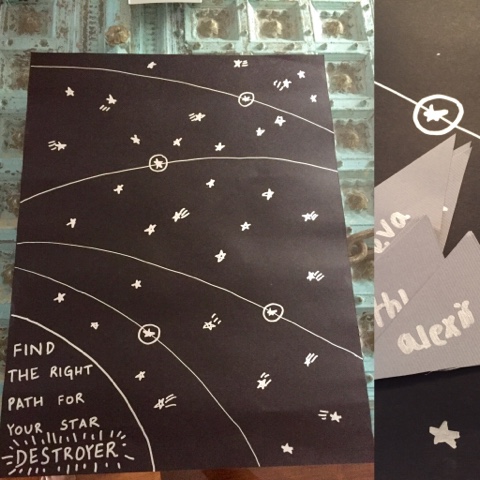 Star Wars equivalent of 'pin the tail on the donkey'. Each kid gets a triangular 'Star destroyer' with their name on it. The back has double sided tape. So blindfold, spin around to make them dizzy and then tape peeled and stick. 4 winners - one for each circled Star. 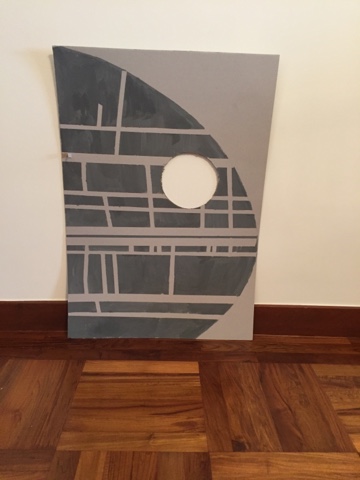 Tape resist Death Star - two tries to get a 'ray' through the Death Star. 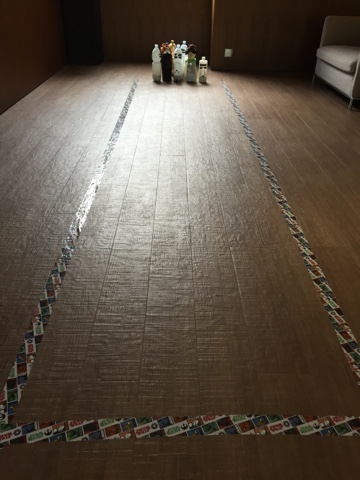 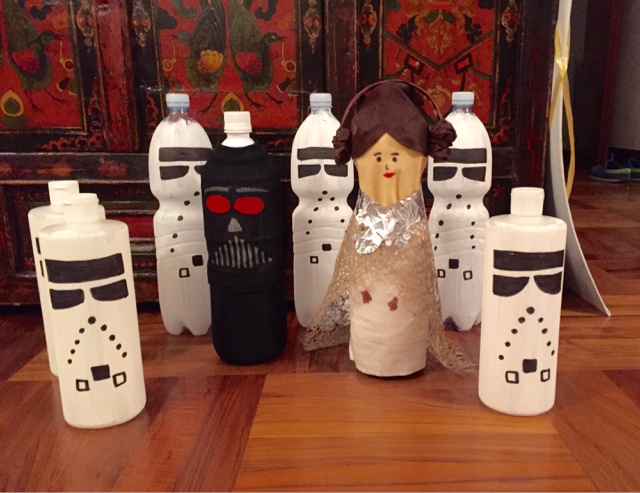 Just some of the bowling pins Kid and I made together. We also had Chewbacca and C3P0. 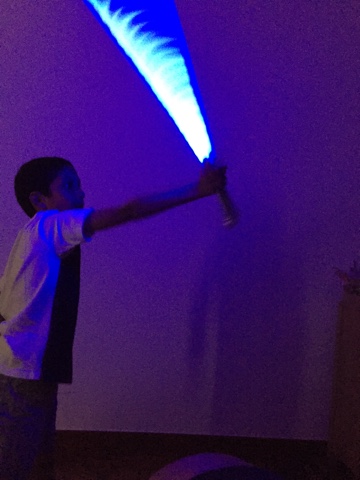 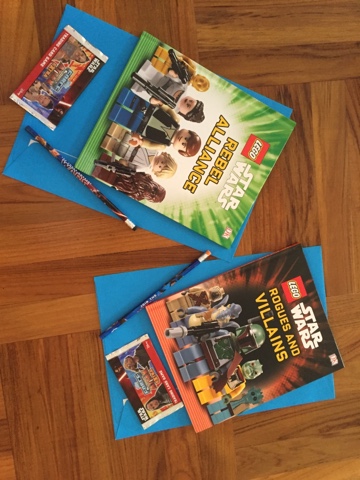