As with all breaks and holidays food was focal point this time as well. Whom am I kidding? It’s the focal point of my very existence. 2&aBit days was not enough by a long way to enjoy all the food that New York has to offer but since it was all we had we made the most of it by eating nearly constantly. Coffee at Pax Organic shops, bacon-maple syrup – pancakes at all American diners and random ice creams and snackie things to keep up going.

The first meal, or rather part of, is pictured here. This is a traditional bar-b-que at Wonjo on 32nd Street, the heart of Koreatown or K-Town as it is colloquially known. K-Town is easily likened to a Chinatown or Southall in that it is a vibrant mini-township within a city, a magnet for migrants and curious visitors alike. I love how whole migrant populations are drawn to each other for the familiarity of their own peoples and will build whole communities around each other. It’s all a bit like a long flow-y, manifold, swirly skirt, gathering itself up and then settling itself down and gathering its people into its folds. Among these folds there are shops with imported delicacies, favourite strange drinks and unimaginable ingredients. There are restaurants designed to make the heart ache for a homeland but reassure with comfort cooking so familiar yet so far away. K-town is all this and more. As we walked along the streets that call themselves K-Town (just after an unsuccessful trip to the Empire State Building) we saw vegetables and meat being unloaded into the basement kitchens of rows of restaurants by a chattering few men. When we came back for our meal the chatter was a fair few decibels louder as the bustling pavements threatened to spill out into the fast moving traffic and people hunted for the location of their next meal.

Wonjo is one of many many that advertise itself as the BEST KOREAN BAR-B-Q. Of course they each spell barbeque differently (B, BE, BI and Q, QUE, QU, even KYU) and for a fleeting moment I wondered if each is the best at their particular spelling. V originally came to Wonjo with and on the recommendation of a colleague. He raved about it so that we decided to meet friends there, to catch up over dinner. It was a brilliant choice. They are one of the few (or the only, I forget) that bring live wood charcoal to put under the centre grill in the middle of the table. We had a lovely hot shallot pancake to get us going, followed by the barbeque. All the small dishes you see in the picture are accompaniments to the meat which is cooked on the hot grill plate built into the table. They include kimchi (best known) and a 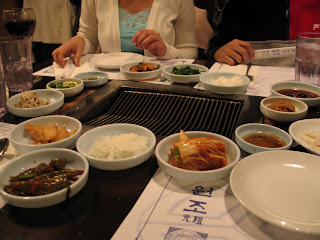 variety of chillies and sauces and marinated tofu and unidentified fantastic objects. The meal is a sort of quick encounter as the grill man puts in the coal, arranges the dishes, leaves the meat to sizzle, comes back to turn it occasionally and finally signals when its ready to consume, all in the space of a few minutes. Then it turns into a do-it-yourself affair as each person manipulates their chopsticks to place some meat is in a large lettuce leaf and add in a condiment accompaniment from the pretty selection. Wrapped up tight and popped in the mouth this is one of the most wonderful explosions of taste, hot and cold, spicy and piquant, all at once. We jabbered away between mouthfuls, talking about random things, common friends, the differences between the American way of life and a Londoners existence. Talking over a tasty hot meal at the tail end of cold windy New York day was the perfect ending to an evening.

Our other mentionable meal, not pictured here, was at Keen’s Chophouse. The inside of Keen’s is quaint and very old American English, if you know what I mean. Dark wood Gentlemen’s Club, if you don’t. They claim to have the largest collection of pipes (the smoking kind, not the draining ones) and while some of the older, rare specimens are framed to adorn walls the entire ceiling is taken up by rows of clay pipes hung closely together. It makes the headspace lower and the setting more intimate. The name is vaguely reminiscent of a Chinatown take-away but this restaurant is as far away from it as the Earth is from the other one.

I won’t meander on explaining what we ate, only say that it’s the best steakery in the known universe and although a bit steep well, well worth the time, effort and money. V and I spent a long chatty evening, beginning the unwinding process that is key to a break’s success. The steak portion was larger than my head and cooked to perfection, which helped immeasurably.

What is food without music I hear you say? Well on that count we weren’t disappointed in the least bit. We got ourselves matinee tickets for Mama Mia and wandered up and down Broadway in anticipation for hours before the show wearing away at the road and taking cheesy shots of Times Square. The show did not disappoint and we got more than the value of our heavily-discounted-but-still-expensive-as-hell tickets. Divine voices and 22 ABBA songs all woven into a brilliantly made-up age old story involving romantic island, triangular love twist, a wedding, trial & tribulations of growing up, identity etc. Hindi masala movie with suspense and all. And more than the voices it was the energy and choreography that drew the eyes to the stage. Thank goodness for CD’s as I am now listening to it over and over again in a loop. So catchy!

We did so much without doing very much beside eating, walking, talking and shopping that our 2&aBit days seemed longer and utterly filled in. So when it was time to head off to our actual holiday by the beach it seemed too good to be true. I’m all for this new format of short break & then long holiday, all in one go.