1. I've been on a see saw of crazy these past few months. If it all came out in one giant rant you people would certify me for sure. These 'problems', as codified by me, are very first world, middle class everyday problems. In reality it's just the adjustment to a whole new city. It hasn't been a difficult few months, it's been a thinking few months as I've battled away various unsavoury things about here and taught myself to deal/ ignore. The thing that's got me to the other side is acknowledging that even if they are not world problems of poverty and war, they are very real problems in my world. Once I acknowledged that and stopped trying to squash them away they have all resolved themselves quite satisfactorily.
2. It's also been a ridiculously busy time. My parents were in town for a few weeks in March and although we mainly relaxed its still a gig keeping a house running. They have been followed by numerous houseguests ranging from a few days to a week at a time. I'm still in the anti full time help camp. I like cooking and being the one waiting at the bus stop to hear my son gush about his day. I have a cleaner twice a week (much like London) and the rest of the week goes by quite smoothly with a bit of planning and staying on top of the chores. The more I hear about full time help the less likely I am to give in.
3. One of my public bugbears nowadays is the one kid vs two or more kids. It's the same argument I had when we didn't have kids vs people who did. Whether I have no kids or one kid or five kids the answer is the same - my life is as full and busy as the next person, it's all about choice and you AREN'T busier than us. People are shit at keeping in touch. Just accept that as the given and stop with the using your if-you-had-more-than-one-kid as an excuse!
4. After scouring this city for cushions that would cost less than $90 and be pretty and match our very blue furniture I nearly gave up. Then I turned back to etsy.com (where my design heart lives) and after about 16 hours of trawling and twelve emails back and forth found cushions that might just fit the bill. The lady made up the block colour ones to break the pattern up and voila we had what we wanted. After weeks they have arrived and I have procured fillers and now suddenly the living room looks a bit more inviting. What do you think? 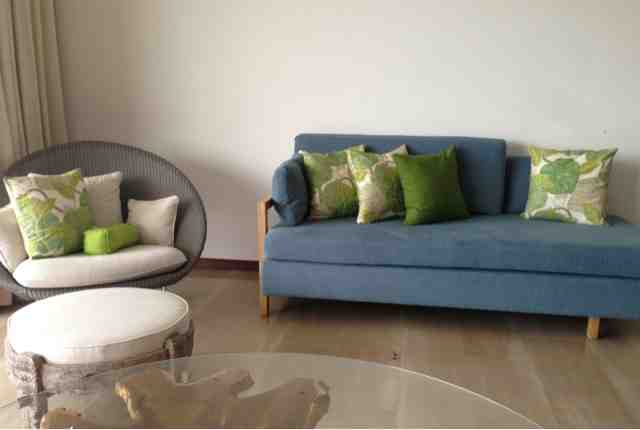 5. June promises excitement. It's a month of no school. We have a week of holiday planned and a week in Hong Kong while V works. And two weeks of lazing in Singapore in between. Good good good.
Posted by 30in2005 at 5:21 PM 3 comments: