V and I have been so upset and shaken by the Nepal earthquake. The sheer guilt and thankfulness for him having followed his dream and come back safely to us while for so many it has been a fatal journey is currently overwhelming. It is the way of natural disasters that one looks instinctively for their own loved ones in the face of knowing that others who are not ours in the same sense are at risk / losing their lives/ livelihoods/ shelter. It is not without guilt though that I want to hold him and give thanks that he is alright all the while knowing that for so many families their loved one is not. And similarly he has spent the last 3 days tracking down friends he made who were preparing at the Base Camp and Camp 1 for ascents to the Peak, porters, guides and organisers who helped him on his way and friends who set off on other treks in the majestic Nepalese mountains. Only last night has everyone been accounted for, safe and sound.
I had a huge fight on a whatsapp group with a classmate from college. He first asked everyone to contribute to an NGO his wife runs (which is fine, I understand direct fundraising) but in addition thought it best to keep sending messages announcing how NASA had predicted an earthquake to hit India/ Nepal at 3pm/ 8pm, today/ tomorrow etc. Scare mongering at its very worst. Stay outside from 7.50 to 8.30, I'm sure a big earthquake is going to hit etc. This ability to predict things is blatantly untrue and just the perfect fodder for whatsapp groups. It made me crazy and I lost my cool while trying to not lose my cool (if you know what I mean).
On the other side though there has been an outpouring of love and thankfulness for V's safe return on FB, via email and text and whatsapp from friends and family around the globe. Warms the heart knowing we have a little world of our own that cares enough to ask/ check/ love.
There is also the question of how does one help. How do you choose between disasters or needy causes? It is the subject of my years of fundraising - how do I get you to care about (ie donate to/ promote) my cause? I guess the knowledge that it could have been you had you stuck to the original plan is a powerful tool. While V does his part in helping Nepalese causes now so near and dear to him, I am this week contributing to a cause dear to me. My friend is living on £1 per day for food in a fundraising bid to raise awareness and money for Action Against Hunger. By day she works with vulnerable women and via this project she is living on a £1 per person food allowance in an attempt to see/ show how very little that is. And how so many women make that stretch to feed themselves and their children. She reminded me of school holidays and how children who would normally get a free and hot breakfast and lunch at school then have to eat at home putting untold pressure on their £1 per person budget. This leads to mothers subsisting on cups of many times brewed tea as replacements for entire meals or skipping meals to feed their children. My friend is an E14 hero and I hope some day to be back in that neck of woods and drinking a cup of tea with her. If you want to contribute to her cause please click on the link. Every £ counts: https://www.livebelowtheline.com/me/nadinepain
To support the search for survivors and the delivery of relief to Nepal click on this link: https://www.redcross.org/combined-donate?donationProdId=prod9150029&campname=donateNepalEarthquake&campmedium=aspot_dis16
There isn't much more in life than our families, friends and these lives we hold so dear. It makes all other things seem so inconsequential. Kiss your spouse and hug your children, call your parents and email your friends. You are not alone and may you never be.
Posted by 30in2005 at 7:21 AM 6 comments:

So two Friday's ago Kid and I said goodbye to V and boarded a flight to Delhi to surprise my parents. An hour later V boarded another flight, to a long anticipated, much prepared for trip.
Just over a year and a half ago, to coincide with turning the big 4-0, V sprung it on us that it's long been his dream to climb to the Everest Base Camp. Well a year and a bit in the making he was off. He had trained and I had shopped for energy bars (amongst other essential supplies!) and he had heard and read stories of how tough yet exhilarating it was going to be.
We had made an illustration to show us his route up and down, how many km's and hours each day. Kid was excited but I think it was/ is all theoretical to him. He doesn't understand distance or time in quite the same way yet but he was caught up in the excitement and bless his little heart he told everyone his dad was climbing Everest! 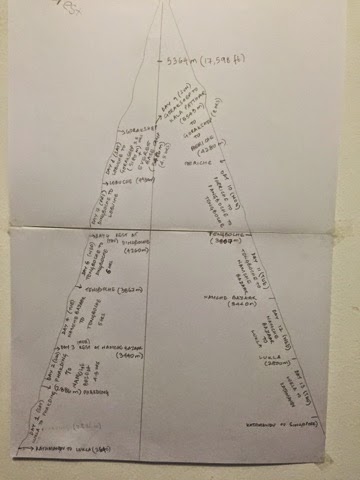 In Delhi, the parents were suitably surprised and while it all started very well, we both promptly had a mild form of food poisoning. But we soldiered through with Smecta/ podophyllum/ Lacteol Forte. Met a few (the most important) people but not as many as I'd have liked.
We talked to V everyday on a local Nepalese number. It was clearly a tough slog despite the training and he sounded exhausted and exhilarated all at once. We got back the following Friday and V was still two days away from Base Camp, slogging it through the snow and beginning to sound disheartened that he might not make it thanks to the inclement weather.
Sunday afternoon he finally made it. HE MADE IT TO EVEREST BASE CAMP! Called us briefly, his voice breathless with 50% oxygen and joyous with his accomplishment. Then began his descent - and finally on Wednesday night I went to meet him as he got off his flight from Kathmandu, mountain beard added and so many pounds lost.
He spent the next 4 days exhausted, sleeping 12 hour stints, playing with his delighted son and eating all the things that he had abstained from while he trained. We've been looking at the incredible pictures and hearing the stories. It's truly an achievement and a serious bucket list item knocked off.
Talking of bucket lists it would seem I am not inspired enough by my very fit Better Half! We went to watch the very very funny Russell Peters live in Singapore last night. Watching him live was on my (very sedentary) bucket list and he was every bit as funny as I expected. We had expensive but pretty bad seats, had to strain our necks to see him live (as opposed to on the giant screens). But we saw him live and he can really get the audience laughing so even the seats I was willing to forgive. It's been a busy time of year for us all.
We've both crossed things off our lists this year and it would be fair to say V is an absolute WINNER in my eyes!
Posted by 30in2005 at 5:07 PM 4 comments: