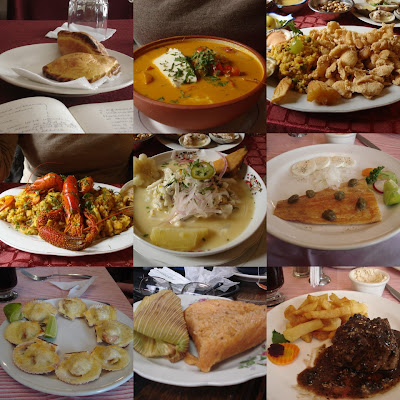 From top left to right, as the eye goes (and the same pattern repeated on each line):
Line 1:
a. Saltena (the n is meant to have a little line above it , making it a 'saalt-enya') - the one at the back - a pastry baked with a pork filling (in this case, it comes in numerous types). Eating of which is an art; it needs to be shaken before eating to allow the liquid to dissipate evenly and held like a glass and eaten from the top end. The one in front is a chicken empanada. Flatter and the mixture inside very much like a chicken patty - dry. This is street food, and something that we snacked on all the time. Cost is less than US$1. For both.
b. Seafood soup: spicy and Peruvian in origin. The eater was enthralled.
c. Calamari with spicy rice: crispy Calamari (and lots of it) with a pile of risotto like spiced rice - which seemed to have everything but the kitchen sink chucked in for flavour.
Line 2:
a. Massive Lobster on the same 'everything' rice.
b. Cerviche - marinated raw fish in lemon and herbs - utterly delightful, fresh ingredients - this was king fish, wholesome and tasty.
c. Smoked Trout - which is the beloved fish of this landlocked country coming as it does from one of the big lakes. Served with capers, boiled eggs, chopped onions and a lemon slice. Quite addictive.
Line 3:
a. Scallops: Flash baked with a sauce. Once again the recipient loved the dish and shucked them down in minutes!
b. Humita: Cornbread steamed in the leaf next to it. With a centre of local cheese. I liked the cheese but didn't care much for the bread itself. Also street food, incredibly cheap.
c. Tenderloin in pepper sauce: Decidedly non-Bolivian except for the fact that they love meat and potatoes. At a very fancy restaurant, topped with the very best pepper sauce I have ever tasted, the tenderloin was cooked to perfection and melted in the mouth.

The food was excellent, both in quality and quantity and value for money. I ate trout in various forms one of the best being stuffed into baked cannelloni with spinach and mushrooms. They eat a fantastic condiment called Yahua (pronounced Ya-khoo-aa) which is some serious chillies, blended with tomato and a local parsley like herb on a stone mortar and pestle type instrument. It's on the table when you sit down and they eat it with bread and butter or just dolloped onto whatever they are eating. We also ate at a local 'chicharron' place - which serves pork that is deep fried in special herbs and served with large corn kernels and lots of Yahua. I didn't much care for it but everyone around me wiped their plates clean!

The only food I really missed was rice which is replaced by potatoes as the base for everything in Bolivia. Being the place where potatoes originated they take their potatoes seriously and eat 4 or 5 different types (of many hundreds I believe) depending on what the meal is. I didn't take to their potato's either as they use them in a completely different way to what I am used to. But I tried everything - different textures, tastes, spices, methods of cooking. What I really missed was rice and Indian grub. Something I have been studiously making up for since I got back and over the jet-lag.

I'm back. After two long weeks away from everything familiar, desperately lonely without my boy. It was a super trip except for the constant 24x7 headache and copious nosebleeds, thanks to the killer altitude. And except for the fact that my boy was one million miles away.

Bolivia is a fabulous country, its people warm and kind, its food just up my street, its winter weather cool and inviting. I met some fantastically inspiring people and bought back some trinkets to remind me of this opportunity of a lifetime. Especially after the hideous 24 hour journey to come home. It's taken multiple hot baths and hours of deep sleep to untangle my limbs and pull the exhaustion from my bones. But I'm finally here. In good old grey London. At work. Reminiscing about my adventure and sheer luck at having had a chance to visit life at 3500m above sea level.

Although I studied Spanish for a year at some point in life it has almost all escaped me and I am dependent on my wonderful interpreter S to get me through days of meetings. The people are, without exception, friendly and patient. I'll try every few days for the next week to put down 5 new things (at a time) I learn about this magical place and its people, culture, food. Here go today's 5:
1. La Paz sits near the bottom of a cauldron of jagged slopes that are the Altiplano. The city is at 3500m above sea but the airport is in El Alto which at 500m higher, precariously perched on the rim of the Altiplano, is the highest International Airport in the world. Driving distance between the airport and the La Paz is only about 10km but the descent of 500m makes all the difference in how you breathe.
2. The airport is very basic and small but spotlessly clean. It's one conveyor belt delivered our suitcases and its two immigration officials smiled broadly while stamping our passports, no questions asked. Apparently flights need double the runway distance to land or take off from and specially re-inforced tires due to the altitude.
3. Everybody, and I mean everybody, from concierge to shopkeeper, will greet you with a broad smile and a Hola, Buenos dias, buenas tardes, bunas noches, hasta luego - depending on the time of day. When you meet someone and are introduced you will be kissed on one cheek by them. Invariably this is on the right cheek. And they will come round to kiss you goodbye as well. So when our day starts we have a good 15minutes of meet and greet and then the same in the evening to say goodbye. I have learnt to budget this into my busy run run run days. Its a skill.
4. The air is very thin. I cannot emphasise this enough. The first few days we drank coca tea to help with the nausea and headaches, supplemented by brufin as I am allergic to the ingredients in the prescribed altitude sickness meds. I'm not having any problems breathing although all breathing felt a little strained the first few days. I've had only two nosebleeds so far and have given up trying to use the small treadmill which I only managed for 30 minutes before I could breathe no more. The gods of the gym will understand.
5. The view is fantastic. Everywhere you look you see the plains of the Altiplano rising up, jutting into the Andes behind it. El Alto is a new-ish city built into the higher reaches of the Altiplano, which make the sides of the cauldron in which La Paz is the floor, look alternately scraggy and heavily covered with houses. At night it just looks like a wall of lights, each illuminated house a little twinkle in the blanket. I also absolutely have to mention the Illimani which is the highest peak in Andes that is visible from La Paz. The highest overall peak of the Andes is in Peru I am told. The Illimani is impressive to the say the least. Its snow covered peak rises magnificantly behind the Altiplano and my eye is drawn to it each time I am outside. More than one Bolivian has told me it is the symbol of La Paz. I can see why. I got a great view from the flight as we were landed but it was too early in the morning and I was too groggy to do anything but marvel open jawed at the scenery below. I promise you a picture.
I am more than a little in love with La Paz. I hope someday V and I will come here together. Buenos dias!
Posted by 30in2005 at 10:45 PM 3 comments:

I'm beyond exhaustion. I have been trying to get myself to sleep after the two seemingly endless flights (8hr20 to Miami and 6hr20 to La Paz) and 6 hour transit to get here. No luck whatsoever and so after doing my accounts I am blogging and watching the new season of Grey's Anatomy. The sheer height has meant that the air is thinner and I feel like I've been doing deep breathing exercises since I got here. Some herbal tea and a light lunch of soup seems to have helped. Wonder how I'll manage once I am out of the comfort zone of this place and in the real world, at work? How long does the body take to acclimitise? Answers that seem minor in comparison to the deeper life affirming questions that the fantastic view of the mountains from every room of our apartment beg us to ask.

More than 24 hours since I left the comfort of my home in London here I am in La Paz, Bolivia, on weeks of exciting work and play. The first view of the amazing Altoplano was as we landed and the sun was rising a gleaming deep orange hue around us. The whisps of clouds and the sheer expanse just took my breath away. I'm hoping I can take and post loads of pictures once I am back. But don't count on it as I haven't even downloaded my fab (?) pictures from India as yet. Will try and post my observations of life in La Paz and the surrounds as and when time and the internet connection permit. Till then suffer my horrid broken spanish accent - Buenos Noches! (pronounced Boo-e-nos No-chez). G'nite people....
Posted by 30in2005 at 4:09 AM 9 comments: