We had hired man and van on the weekend to bring all but a bag of overnight and school things to the new place on the Sunday. We had discussed where furniture would be placed. We had convinced Kid that the Master bedroom would be more suited to us and the big room with the mountain view the perfect backdrop to his Lego collection. I had done a short grocery run for essentials. We were ready.
A more clear, welcoming, bright and sunshiny September day could not have appeared if Santa himself were bringing this good kid their presents early.  Kid had skipped off to school happily this morning with instructions on the new bus for the return. A quick breakfast and last look for stray Lego bits and socks hiding in drawers before we checked out and drove to our new Hong Kong home.
The packers arrived on time and the set up of padding lifts and stairwells and floors to avoid damage from all that pushing pulling dragging began. It was 10.30 by the time the first load of stuff made its way in. The supervisor informed us that they had scheduled just this one day to unpack. Ridiculous considering it took them two and some days to pack. V was on the phone trying to sort this out and keep up with his work.
The crew of 4 quickly began to divide and conquer. We directed the boxes to the correct rooms and ticked numbers of inventory lists. They unpacked at a feverish pace. It was a dusty job, of cardboard dust and packing paper and odd things turning up in the wrong boxes. A quick lunch break and it resumed. 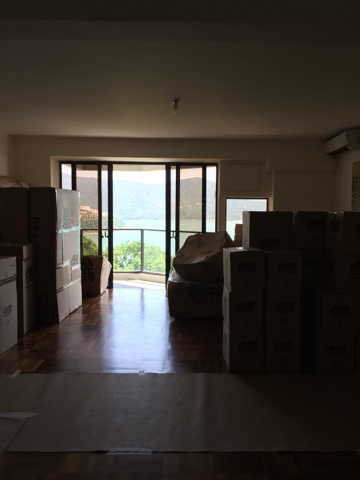 Kid got back, slightly bewildered by the 4 minute bus ride and the entire bus spilling out at our building. He and I popped loads of bubble wrap sheets, made a little box tunnel for two cars to play under and watched our store of Peppa Pig and Thomas the Tank engine on the iPad for entertainment.
The afternoon crawled on. Every box was soon in the flat despite the tall tower having only one working lift. But we were far from unpacked. The boxes were stacked ceiling high in most rooms and they began the process of putting together some of the furniture we had.
V ran out and bought back pizza for an early dinner. At past 6 it became evident that there was no way to finish this unpack tonight. Many words were exchanged calmly with supervisors and people in office. It was agreed that they would have to leave by 7.30pm not just for the peace of our neighbours but also for Kid to stay within a routine that would allow for a productive school day the following day. They could only come back in two days to finish the unpack and assembly. So be it.
We were in. And our floor bed was moored in what felt like a disorganised camp site. Yet we slept soundly, with the whooshing of the waves keeping tempo with our dreams.
Posted by 30in2005 at 3:35 PM