Not this Sunday (because I threw another meal, lunch this time, for 8+6) but the Sunday before was a lunch worth talking about.

I had arranged a trial swim class at a pool in Turf City in the hope that my son would finally find his inner fish. He's Cancerian and I believe in that sun sign crap. Also he like baths and isn't the pool just a giant tub?! Anyway, after a week of tears and many promised 'incentives' linked to TV watching he agreed to go to this class and try it 'only one time'. So off we went on Sunday at 11.30 to have a look and try. I won't bore you tears except to say it was an unmitigated disaster and by the middle of the class we had to dry off many a tear and a small boy and leave. V and I walked in sullen silence to The Grandstand, a small fight simmering on how these tears and fears were dealt with.

Anyway, the pool was quickly forgotten by the time we reached The Grandstand. We had planned on eating lunch and getting our groceries there. We chose Omakase burgers, a place we've heard tons about but never ventured to this far.

It was on a busy strip of the mall surrounded by restaurants and swarming with people. We chose seats on the fake grass outdoor area (picket fence, white tables and chairs, all indoors but outside the main resto). We ordered classic cheeseburgers for V and I and the kids version for Kid. I ordered a Mexican Coca Cola at some exhorbitant price because the sign at the counter extolled the virtues of this cult drink. The boys went for juice.

The burgers were delicious, better than any I have had in Singapore but the portion sizes very small. Exhibit a and b below are one of our burgers and the kids one - the size difference was minimal. The sweet potato chips were a bit thicker and a few more but the actual burgers were dismally small for the price. 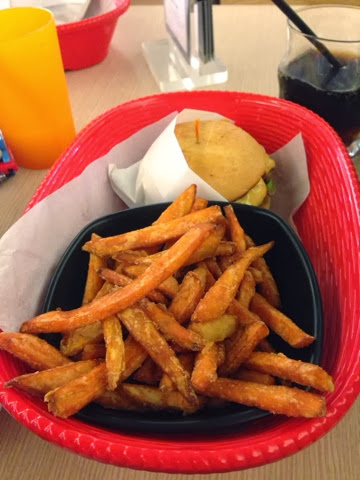 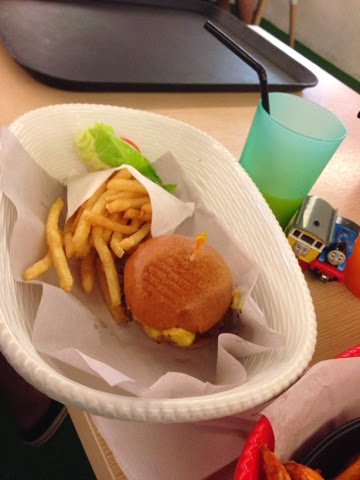 The size thing really bothered me with the juice where they got good sized glasses but not fully filled. They could have just halved the size of the glass and then they would have felt filled. This just made us feel shortchanged. 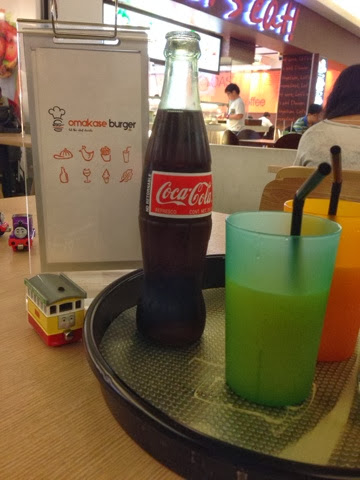 It was a good meal alright and after a year of pursuing a good burger this was just what we needed. Not the best but far far away from the other sad samples that pass for burgers. The other big bug bear is that there is no vegetarian or fish version. And while this may not be a large  market surely a chunk of the huge Indian / expat population is looking for choice. I never quite get why more places don't address this. How hard is it to make a good vegetarian patty - all the other fillers / bun would be the same. Anyway.

The cola was nothing but Thumbs Up masquerading in a lovely glass bottle, calling itself Coca Cola. Yum. So in short a good meal at Omakase and one I would revisit if I'm in the neighbourhood or craving a burger, whichever comes first.

P.S. Yes you read that right. Two home cooked meals for Guests in as many weeks. My Singapore domestic diva is waving shyly from behind the fridge.

P.S. Just to clarify, Kid loves the pool and is happy to get in and never get out (especially on holidays). His fear is the idea of a Class and removing his armbands so he can properly learn. New strategy has been employed. I'll post when I know whether that will work.
Posted by 30in2005 at 1:12 PM