I was creative as a child but somehow growing up I shed off a lot of that instinct. Or maybe I blocked it out in the face of needing to be practical. I don't know. Either way I've never thought of myself as very creative. Sure I'll do the odd creative thing but I usually attribute that to a spark or an idea borrowed from a blog/ Pinterest.

I think though that a lot of my one latent creative gene has found its way back lately. I'm convinced that this is because I have learnt to let go of a lot of things and process things I don't like with speed, both of which are freeing up my mind space to do other things. Also being the mom for a small and inquisitive child helps. It starts with hand impressions and gets more complicated as they grow older. And I don't want to struggle to keep him occupied all afternoon and resort to an electronic babysitter. So I improvise.

As a mum I'm constantly trying to drum up interest in things other than trains. Things that I can develop a smidge of interest in - lying on the floor and playing hours of pretend trains gets old to say the least. So again I borrow ideas from other blogs and come up with games from very day things like cardboard boxes and toys he already has but steadily ignores.

This week I pulled out a book he got from a friend in London for his 3rd birthday. It's called 'A Walk in London' and it's geared for an older child I think but the illustrations are lovely and I've read a simplified interpretation of it to Kid. He seems interested even though all his memories of his time there are now slowly but surely disappearing.

Today I had an hour to kill while waiting for someone to show up (story of my life it would seem. 'There stands 30in2005, waiting.'). And I was suddenly inspired to turn over the top of his train table and recreate a mini map of London with blocks and cars and buses and some felt cutouts. Here it is: 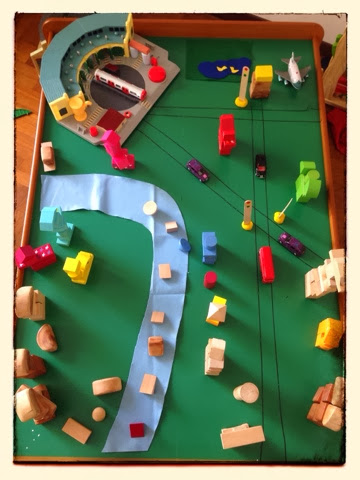 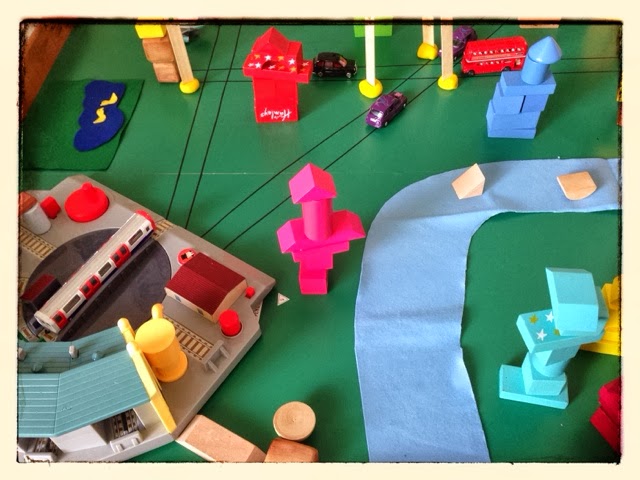 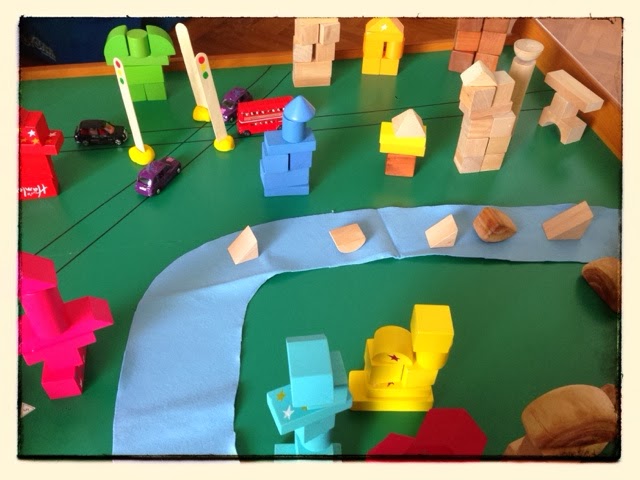 Felt Thames River. Wood boats. Many a tower. Traffic lights. Black masking tape roads (multi purposed for plane runway and train line). London taxis, both black and Olympic-ed up. Double decker red bus. Our local park with a pond and ducks. The tube station with a train sitting in the turntable. A plane for Heathrow. And Monument.

So far I have had an hour and a bit of pretend play while I have sat here and written and edited the pictures. Maybe he does remember something of our life before this.