Turns out I had only two resolutions for 2012. Eating less meat and shedding my need for and actual things that seemed to be crowding our lives.

It turns out that I am pretty rubbish at following through in the most absolute sense. Let's talk about the less meat one.

In January I was very good. I ate a lot more fish than I imagined I would and thought a lot more about what I was putting in my body (a temple though this is not). I was a pescatarian and opened up some of my dusty cookbooks to look for interesting meals to conjure from veggies. It was a good month for resolution keeping and a victory for pescatarian-ness everywhere (the fish disagree!).

February however is a whole different kettle of fish. Or should I say skewer of meat. I ate chicken and lamb and pork at a Korean new year celebration. It's the year of the dragon, special occasion and all that. Then I met a group of friends for a delightful evening (post to follow) and ate lamb amongst other meats. Then I ate leftover chicken gyoza from Wagamama, all kinds of meat at two Chinese meals at my very favourite Royal China and sheekh rolls on two occasions. I had excuses for all these but even to me none of these excuses ring credible. it was mainly down to laziness (not cooking, choosing easiest option) and greed (smelt so so good).

This evening we went out for the evening to a new restaurant in our area - a speciality steak house whose Mayfair branch had us mesmerised a few years ago. So babysitter installed, all dressed up I went of for date night with V. And although I dressed it up with spinach and mushrooms and truffle chips in essence I ate a giant tender succulent fillet steak. It was divine and I am happy as a clam. The pescatarian references roll off my tongue with ease.

And this weekend we are off on holiday and I fully intend to eat whatever is on offer, meat or not. I seem to be unable to make myself a pescatarian in February. I am missing the 'won't power gene I guess. I have to try harder. So on this resolution I would say so far resounding 'fail'.

I intend to think about this though because I know that when I set it and wrote it I meant it. I have to remind myself of my motivations and think about what I want to achieve. Maybe I am not as sick of meat as I thought or ready to embrace the true pescatarian lifestyle just yet. 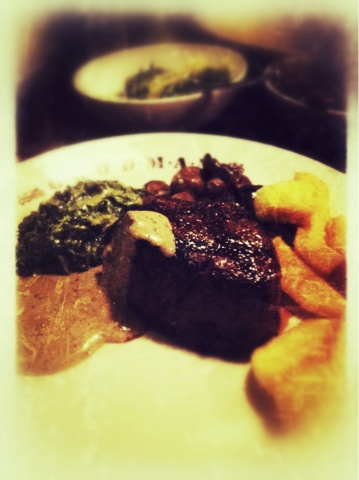