Yellow people! or should I say 'green'!

Below is a picture taken at the ancient Roman spa in Bath. Made the journey last Saturday with V and his parents. Background: V and I are perennially lazy - never trading a lazy weekend in London for the sights around the UK. There is no better incentive than visiting family to get us moving. Last year we went to Cambridge with V's brother and this year knowing we'd have his parents here we decided to make the most of it and see a few places. So to Bath! 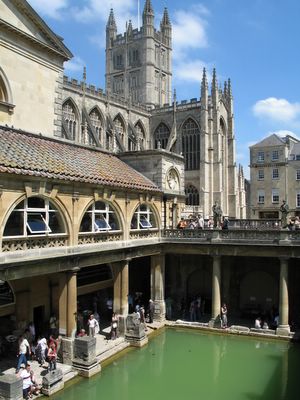 Bath is an ideal day trip from London (just 1.5 hours by train from London Paddington). It's a small town named after the mineral spa baths (with supposedly 'healing' powers) that the Romans unearthed. In ancient times it was called Aquae Sulis - the waters of Sul. Apparently, the Romans had a policy of honouring and incorporating local gods and Sul was a Celtic goddess so they built a temple there in honour of Sul and their own goddess Minerva. Anyway, after a steep £9.50 entry fee each(it was teeming with 'us' tourists so they must be minting it!) they take you through a museum explaining the history of the Baths. You end up below street level at the green central pool. In ancient times this water was meant to be hot and theraputic. Now you aren't meant to touch it although plenty of people sat by the sides with their feet in it. I dipped my hand in - it's surprisingly clean and clear water, but it was luke warm (My guess - the strong sun shining above!).

The building in the background is Bath Abbey. It stands at the heart of the city on the site of an Anglo Saxon church originally built in AD757. Building started on a large Norman cathedral at the end of the 11th century but was in ruins by the 15th century as it was too expensive to maintain. The present abbey church was started in 1499 and that too fell into disrepair after the Dissolution of the Monasteries in the 16th century. However, it has been repaired and conserved and is today teeming with life.

Modern day Bath is a university town with oodles of character. The Baths, Pump House & Abbey stand firmly at the centre of the tourist circuit, surrounded by a heady mix of shops and restaurants, all sprung to serve the many tourists who arrie each day. After lunch we walked along the river Avon (along which Bath lies) to the Pulteney Bridge which is impressive from afar but far too touristy up close.

It was a lovely clear blue skies day and we ate brilliant Italian gelato's standing in the sun. The only real disappointment were the delays to the train journeys. Luckily Bath station is lined with benches and in the shade the breeze was cooling enough.

From it's hypnotic alien like water to the Georgian architecture, Bath is a wonderful slice of England, well worth a looksee!
Posted by 30in2005 at 4:47 PM