Turns out that Singapore is full of Americans and they all live in my condo. This is not news to me as we have attended two well attended parades in our condo the past few years. The change has been that now that my Kid studies at an American School we are surrounded by the celebrations of their festivals in addition to their nod to ours.
In past years we have gone to the parade and tricked/ treated around the condo but Kid was younger and dinner bath and bedtime got in the way of any serious wandering.
This year however we've taken it up a notch. He had a pumpkin patch visit in school last week and a class Halloween Party at School today. He took his Batman costume (grey tshirt, black tracks, Cape and mask - the latter two borrowed) to school and apparently had a great time doing crafting activities and eating marshmallows.
Home and a quick snack and costume change (now a train engineer) later we walked to another halloween party in our condo. Then to the poolside for the parade - two circles of the pool. Then off to trick and treat at the various people that signed up to open their apartments up. V got home in time to join forces with Kids and parents while I headed home to open doors and greet the enthusiastic trick and treaters.
Kid and I talked about decorating a few weeks ago but I left everything to the last two days. I googled and trolled Pinterest for ideas of what both of us could do together. And this is the result: 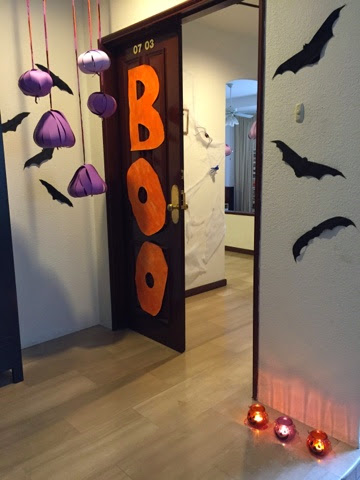 * I cut out the BOO sign and Kid painted it.
* The 3 pumpkin tea light holders cost me $6.
* I had black crepe paper and cut out the bats using a neat trick I found on Pinterest. Took me 10 minutes total.
* The spiders web you see just inside the door - from a $2 packet. We decorated it with spiders made out of pipe cleaners (made a few weeks ago as part of a rainy afternoon activity)
* The pumpkins which look like lanterns are a failed experiment to make pumpkins. I used plain coloured paper instead of card so they didn't retain their shape. Took 30 minutes to cut the strips of paper and another 30 to assemble all 8 pumpkins.
These were our treats: 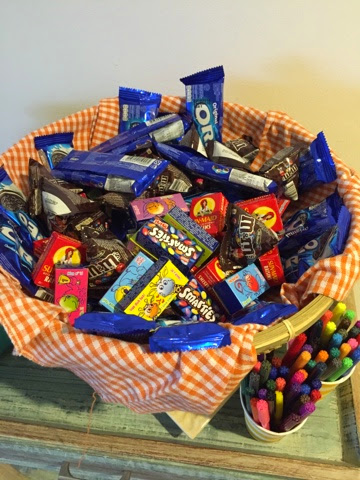 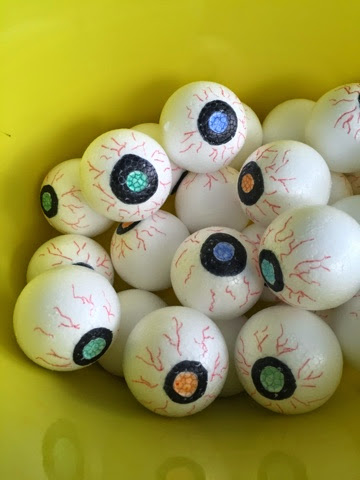 * I own the basket. I lined it with a scrap of orange cloth from the linen cupboard. I bought it for a reason but it escapes me now. The sweets were Oreo cookies, smarties, M&Ms and raisins.
* Bought 90 colouring pens for $6 and asked each kid to choose 2.
* The eyeballs which have single handedly made me the Coolest Mom are styrofoam balls ($10 for 30), felt tip markers and 20 minutes while watching the news and voila! These were the most popular treat and everyone wanted one. We ran out pretty quick.
Kid had a great time even though exhaustion and hunger got the better of him a few times. Once fed he stayed home and greeted everyone with the most cheerful 'Happy Halloween to you' and sang 'trick or treat, smell my feet, give me something good to eat' on behalf of all visiting kids. Loved being the guy handing out the treats and made up rules like 'you must choose two sweets and two pens each'.
Now he has gone to sleep and we are out to dinner. Happy Halloween people!
Posted by 30in2005 at 7:43 PM