Why my Boy is best 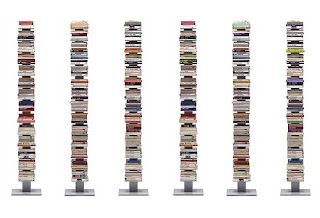 I wrote about my birthday resolutions back near the day and I am happy to report back that things have gone well-ish since then. I must do an update on what happened with each resolution but this is not that post.
This is the post to do with the very last line of that post - the 'more on that later' bit, about my fabulous birthday gift. This image you see is of a series of bookshelves packed with books. I originally saw the bookshelf in a design magazine I part share a susbcription to. I was instantly smitten with it. Thin sharp back with perpendicular shelves neither of which would show once the shelf was full of books. It would look like a tall stack of precariously balanced books. Minimal yet haphazardly full. Theoretcial opposites coming together to make something of great beauty very useful. However I immediately dismissed the idea alongside that of owning a circular stone bath I saw a few pages along (only £19,500). While not quite in the same price league, the bookshelf's exhorbitant price tag meant that I couldn't quite see myself owning it.

I forgot about it until a few days later when I had a was wandering around the house with a few books that just would not comfortably fit into my standard wooden giant bookshelf. I piled the books on the side and began praying to the Gods of Google as I hunted the web for a cheaper alternate. I came across the exact same bookshelf at a quarter of the price on an American design site but after much e-mail to-ing and fro-ing they apologised for being unable to actually deliver safely across the seas. They did however offere up a suppliers name who might just be able to. Voila! A bit more browsing and calling and I found it could be ordered in London and imported from Italy. At this point I handed the details over to V who was pestering me for ideas about my birthday gift and he ordered it and tracked it everyday for weeks.

The delivery of my shelf was quite botched up and even as I wrote my birthday post in mid-July it had not arrived. Lucky me, birthday gift was a multiple part gift: I got one of these giant bookshelves and ALL THE BOOKS I COULD FIT INTO IT. This from V was my birthday gift. So in anticipation of the bookshelf's arrival, on my birthday we wandered into a Waterstones and bought the first 14 of numerous books. The bookshelf finally arrived in early August and was assembled in 3 minutes flat. It sits neatly between a wall and a piece of furniture. It can hold up to 70 books (some dependence on the thickness of the books) and since July I have already bought over 45 of the books. It's good for my soul to go into a bookshop and wander around. All those written words and covers evocative of a story; so much to choose from, so many to choose. These wanderings, as leisurely as they are, lead me to a canvas bag of books and intense longing for a weekend afternoon curled up on the day bed with something playing in the background while devouring a book.

It's my best gift yet. And one I am inclined to ask for as a repeat gift when my next birthday comes around. Now you see why my Boy is best
Posted by 30in2005 at 7:49 PM