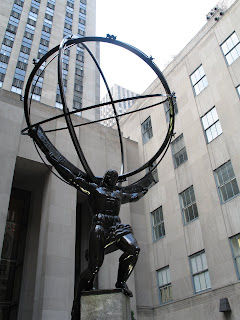 This was not meant to be my first New York post. The pictures and bit I wanted to post first are sitting as a draft on the dashboard but when I tried to edit/ post them just now they seem to have jumped blog. Maybe because I used Picasa (thank you for the tutorial wise blogger-ji) at home to upload them into blogger and then didn’t try to post till I came into work today. Or maybe not, as this post seems to have all 3 pictures intact. I don’t know. It’s all still a mystery to me.

This dude lives outside the Rockerfeller Centre in midtown Manhattan. The building behind him is pretty drab although its massive girth and height more than make up for beauty.

All of V’s sightseeing in his many work trips to NYC has been the view from a taxi window. This was our first time in the city together and with no work agenda for V we decided we would stick to the take it easy plan. That’s the one with no fixed agenda other than to obey our regular cravings for food. So instead of pushing ourselves to squeeze in culture by racing around the museums on a very crowded long weekend we decided to take it all in with just walking around imbibing the air and energy. We’ll be culture vultures next time I promise

We stuck to midtown Manhattan in our two&abit short days. One of the things that appealed to me most about Midtown is the way it is set out. How the Avenues that run from north to south intersect perpendicularly with the numbered streets running from east to west thereby forming blocks. And how 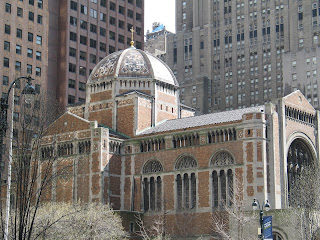 Broadway defies this order by running diagonally across, as if to prove its better than the others and doesn't need the same order to be just as successful. But in the main it’s all based on lovely logic and that with me is always a winner. The great wide avenues are busy busy places with madcap traffic traversing the oneway system with a great deal of honking. Everyone is in a hurry ALL THE TIME. We strolled among the rushing public, taking in Park, Madison, Fifth, 6th and 7th Avenue, up and then down, admiring the scale of it, jumping over potholes with steam escaping from the city's hot belly.

Manhattan is big and its buildings take that word and stretch it to its full meaning. If I had only two words to describe it I would use large and looming. The architecture is not pretty or ornate like in London but the sheer size is an overpowering fact. All of these tall towers are built quite snuggled together and the word concrete jungle is utterly apt. It seems to be a city that takes the business of using space quite seriously and the scale is blaringly immense. (I can't help use the word scale again and again - stop me please). They word skyscraper is literal and we spent a lot of time with our heads turned unnaturally upwardly, necks straining open mouths to their widest to catch glimpses of the tops of buildings. Every inch is used carefully with these gigantic buildings dominating the landscape and peopl 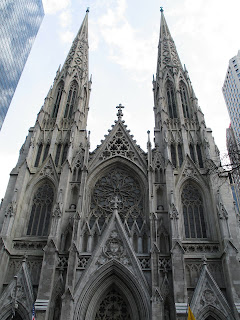 e and cars filling in the gaps. It looks busy and really it is busy as just one trip to Macy’s (which has a whole block of its own) brought home.

After a while all the big buildings began to meld into one in my blurry eyes. An unsuccessful journey to the Empire state building (seriously, the 3 hour waiting to get to the top has put me off permanently) made me crave the ornate short beauty of the square mile that is London City. The hidden gems of Manhattan architecture are the churches that dot the landscape every few blocks. These are utterly short in comparison to their neighbours but sit squarely and resolutely gleaming with purpose, daring their taller neighbours to cast shadows on them. Their stark difference from the concrete and glass scapers and obvious care of appearance was utterly endearing. The two pictured here are the two I loved most: the grey one is St. Patrick’s Cathedral on East 50th & Madison and the other is on Park avenue but it’s name now escapes me. I loved midtown for its buzz and theatre district and shopping but its buildings were overpowering, more awe inspiring by size than design.

I asked 6 genu-ine New Yorkers this question and although each thought there was definitely a cogent explanation, none of them knew what it was: Why is 6th Avenue called the Avenue of the Americas?
Anybody?
Posted by 30in2005 at 7:50 PM